2. To create your sandwich, place 4  Rosti on a flat surface. Top it neatly with 1 thin slices of cheese trimmed to fit on each, then 1 of the ham, also trimmed to fit and then 1 more of the cheese on each. Top with another Rosti.

4. Cook the sandwiches on top of the stove until the bottom is nicely browned. Turn the sandwiches over and immediately put it in the oven. Bake it just until the filling is piping hot and the cheese has melted. If desired, trim the sides. Cut in half and serve piping hot with Crisp Side Salad. 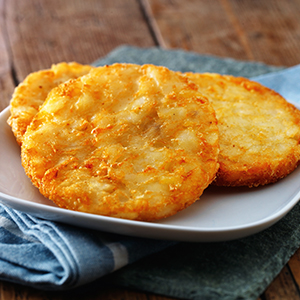